Trends of the floating market: why is floating solar booming, its advantages, costs and what markets are leading the race to become the most powerful

Solar PV plants, especially when it comes to utility-scale, are considered one of the better and more well-established renewable energy technologies and have been encountering a steady rise in their use throughout the last years. This technology is also one of the cheaper options available in the market.

Taking advantage of an already mature technology and market which is that of solar PV, floating PV (FPV) entered the market first in 2007-2008 and has been facing a quick evolution within the energy market doubling installed power every year according to the study “The booming of floating PV” 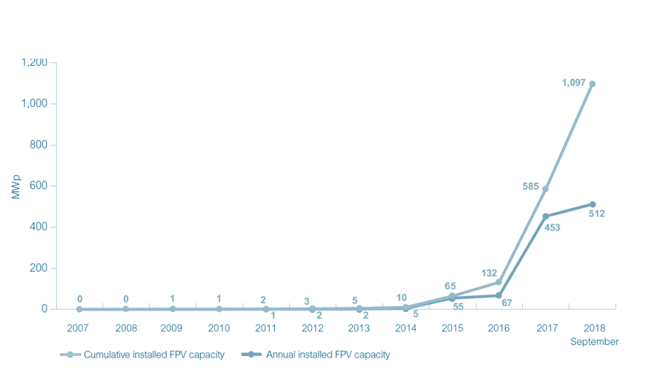 More recent data by Apricum, reveals that as of August 2020, Floating solar had a cumulative capacity of approximately 2.6 GW and although it is still considered a niche, FPV is projected to experience an average growth rate of more than 20% in the next five years.

There has been a clear evolution of the annual and cumulative installed floating photovoltaic capacity from 2007 until 2020. The upward trend in the last 5 years proves that a greater interest is starting to be shown in this technology that is gaining more popularity and finding its way into countries' energy mixes.

One of the most important advantages is the use of an alternative space for installing photovoltaic pv plants (water surfaces) which lowers costs and has a lower environmental impact.  Additionally, in the paper “simulation of performance differences between offshore and land‐based photovoltaic systems”,  published in Progress in Photovoltaics by Utrecht University discovered that projects in the sea perform better than ground-mounted solar generating 12.96% more power per year and a global horizontal irradiance (GHI) 8.54% higher than ground mounted systems.

In summary, the pros and cons of floating solar systems are stated below: 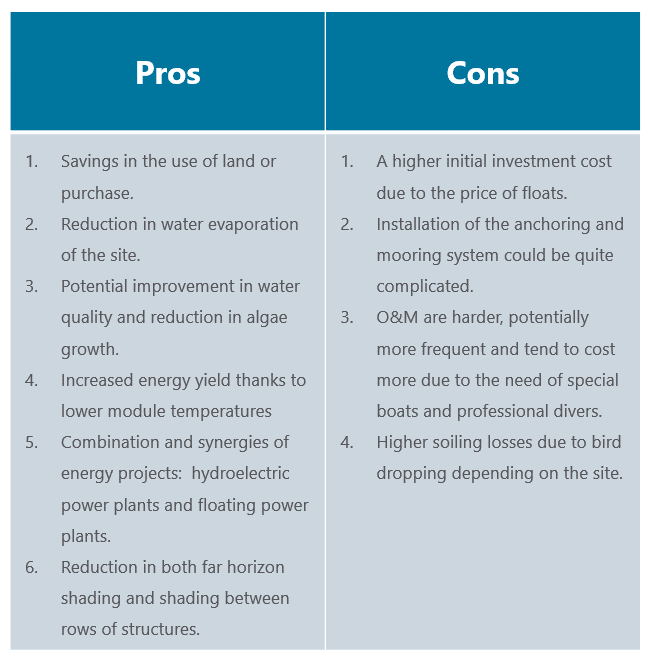 What are the costs of Floating Solar Photovoltaic Systems?

According to the Apricum analysis of the sector, we can state that costs incurred for developing a FPV system may vary immensely from project to project depending on the site. Factors that affect the cost structure include:

The capital costs of floating PV are still slightly higher or comparable to those of ground-mounted PV, attributable to the factors stated above. However, these costs are expected to drop over time due to better economies of scale achieved.

Comparing different bids from FPV Projects, total capital expenditures for turnkey floating PV installations in 2018 ranged between USD 0.8–1.2 per Wp, depending on the location of the project, the depth of the water and the size of the system. However, as seen in the graph, these costs have been decreasing to an average of 0.55 USD/Wp  in 2019 and 2020. 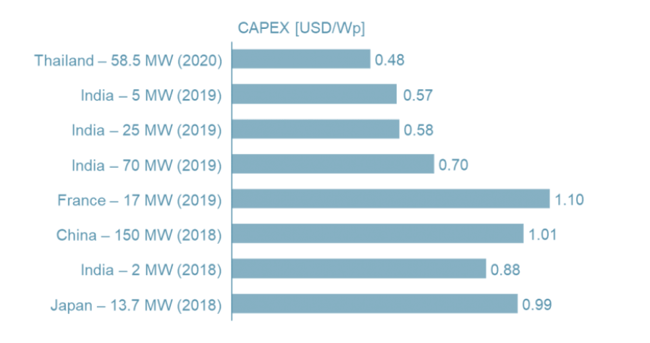 On another note, the levelized cost of electricity (LCOE) for a 50 MW floating PV system is very similar from that of a ground-mounted system. The higher initial capital expenditures of the floating system are compensated by a higher expected energy yield which could range from 5% to 10-15% depending on the scenario and the climate.

Currently, there are more than 60 countries looking to deploy FPV projects, of those, more than 35 countries hold an estimated 350 operational FPV systems, with a cumulative capacity of approximately 2.6 GW.

The largest floating PV array currently operational is a 150MW project in Anhui, China. However, given their current popularity, it seems that floating pv systems don’t hold any record much time. The Anhui project will soon be overshadowed by massive developments elsewhere in the world. Already in the planification and development stage we can find a 145MW project in Indonesia, a 1GW plant in India, and an impressive 2.9GW project in South Korea.

Similarly in Europe, although the UK was the main player in the FPV market, France barged in inaugurating in october the most powerful floating solar pv plant in Europe (17 MW) by Akuo Energy. Again, this project was soon overshadowed by BayWa’s 27 MW solar farm in the Netherlands.

Several other projects are already underway such as 6 (11.1 MW each) projects in Belgium or hybrid hydro-solar plants in Portugal.

In spite of the fact that FPV systems have been deployed for more than a decade, and although the vast majority of today’s 2.6 GW was only built during the last five years, there is a global market potential of 400 GW to be developed under conservative assumptions.

However, to reach its potential, there is still lack of knowledge in areas such as O&M procedures, long-term environmental impact, as well regulations and permitting. On the other hand, other areas such as PV modules, cabling, materials, components, floats, mooring and anchoring, electrical layout, long-term energy yield forecasting and safety issues are better understood.

The deployment of floating solar looks promising as the technologies mature, economies of scale lower global prices and bring opportunities to a wide range of countries and markets.

Floating solar could double the existing installed capacity of solar PV but without the land acquisition required for ground-mounted installations. To put this into perspective, just by covering 3-4% of a large hydropower plant reservoir with floating solar could double the installed capacity and allow water resources to be more strategically managed and efficient by using solar energy during the day.