What are the technical aspects that affect bifacial performance and the reason why simulations using bifacial technology in pvDesign have reached + 150 GW in only a month!

Following our post on economic aspects of bifacials where we looked at the worldwide industry situation, LCOE, global market leaders and forecasts, in this post we will take a closer look into the technical aspects of bifacial technology. These include the differences between bifacial and monofacial cells, albedo and other key factors that affect performance and the energy yield of bifacial solar panels.

The bifacial market has been growing beyond expectations in recent years due to higher efficiencies and lower levelized costs of electricity (LCOE).

Recent data provided by Infolink and Wood Mackenzie Power & Renewables project global bifacial demand to reach 12 GW in 2020 and 20 GW in 2024. In terms of market share, according to the International Roadmap for Photovoltaic (ITRPV), bifacial technology implementation is expected to grow from 12% in 2019 to nearly 60% of total global installations by 2029.

Given the potential of the bifacial technology, the main question is whether the industry will be able to overcome its main challenges:  bifacial system gain, simulating the results, standardization, and bankability.

While normal photovoltaic cells have a full-area aluminum rear contact and an opaque back surface field, the rear side of bifacial cells is only partially covered with metallization. Although this rear side is not as efficient as the front side, according to ArcVera Renewables, bifacial technology allows an average of energy production gain of between 3% to 10% and up to 30% depending on factors such as the albedo, the elevated height of the structure and the Ground Cover Ratio (GCR).

Additionally, it is important to note that converting a production line from monofacial PERC cells to bifacial PERC cells requires virtually no additional costs or production-line modifications;  but just a change on the screen layout of the Al screen-print. This fact, explained in the book “Bifacial Photovoltaics”, further shows the potential of this technology and how easy it could be adopted.

The solar industry is in constant evolution.The use of bifacials is one of the most recent innovations the industry adoptions and as such, several reports study this phenomenon. In these studies energy yield efficiencies and economic viability of projects are calculated by taking into account a series of different parameters.

When developing solar plants with bifacial modules we can differentiate at least 7 key factors that affect the energy yield. These are the irradiance factors, the module efficiency, the ground albedo, the tilt angle, the elevated height to the ground of the structure, the GCR and the array shading. 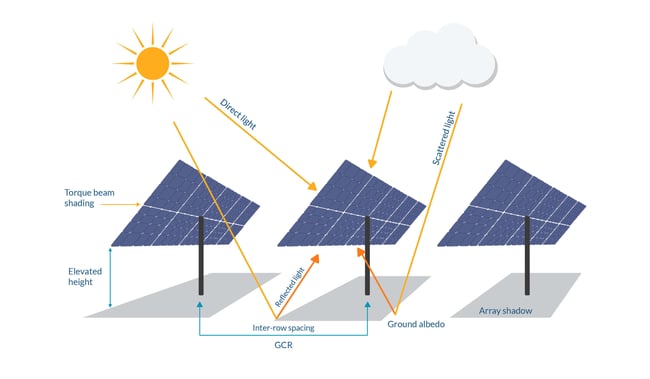 In terms of irradiance received by the module, bifacial gain is directly proportional to the direct sunlight, scattered light and reflected light received by the rear side. Albedo, ground coverage and mounting characteristics also have an impact in these calculations.

Moreover, bifacial gain is also affected by the module quality and other factors which we will proceed to study in detail.

Bifacial modules take advantage of the light reflected from the ground and received by the rear side. The proportion of that light reflected off the ground is known as albedo and it is directly related to the type of soil. The higher the albedo, the higher the production gain. The following table shows a collection of albedo factors for different types of surfaces.

As an example, given a snow-covered ground in Iceland, with an albedo factor of approximately 0.68 (according to satelital data), the estimated bifacial gain would be  around 16.55% according to pvDesign results. On the other hand, a sand-covered site in California with an estimated albedo of 0.36 would result in a 7.3% bifacial gain.

These estimations have been carried out for a scenario of fixed structures with a 50% GCR and a bifaciality factor of 75%.

Understanding how bifacial gain and energy yield depend on the albedo highlights the importance of adapting the ground and maintaining it in order to ensure minimal mismatch losses.

Height to the ground

The height to the ground is another key factor to take into account when designing and simulating solar plants with bifacial technology. Increasing the module height improves the backside irradiance uniformity, therefore increasing bifacial power gain due to increased perception of ground-reflected light on the rear side. However, increasing the height could also lead to increased wind loads on the modules.

According to studies from Longi Solar and Waree, the height should be higher than 1m. The suggested optimal is 1.2-1.3 for the best yield results.

This notion would be reinforced by the simulations obtained in pvDesign. The conditions of these pvDesign simulations are further explained and analysed below. 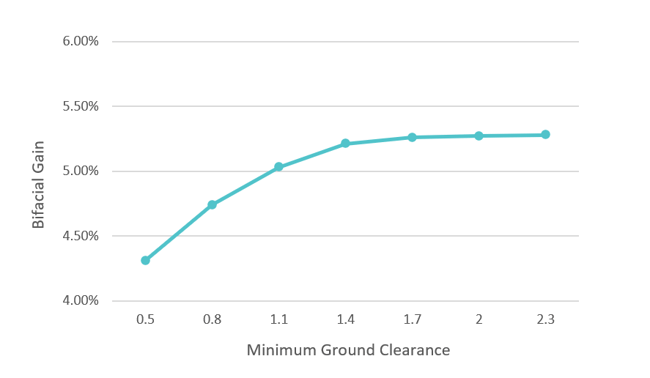 pvDesign effect of height of the module (Ground Clearance) on a bifacial gain Source: pvDesign

GCR is the ratio between the area occupied by PV modules and the total available area. This ratio is directly related to the pitch distance, the inter-row spacing between tables of PV modules. Decreasing the GCR implies a greater pitch distance, thus increased energy production. However, this also has an effect on the power plant area. The suggested GCR for optimized results according to Waaree and pvDesign would be around 40-50%. The conditions of these simulations are again further explained below.

A recent article on bifacial project’s LCOE published on Joule found that bifacial modules paired with single-axis trackers achieve lower LCOE in most locations (93,1% of the world) when compared to bifacial modules mounted on dual-axis trackers. The latter would generally show a boost in energy yield of around 35 - 40%.

To obtain the above conclusions, the paper mentioned explores the cost effectiveness of bifacial versus monofacial PV plants with different structures (fixed-tilt, 1T and 2T) worldwide and compares the results obtained.

Summary of the analysis of yield, cost and LCOE difference with bifacial modules. (Source: Joule ) we recommend to visit the source to better understand the different heatmaps

On the one hand, in terms of energy yield potential, with the same mounting structure, using bifacial configurations outperforms monofacial modules with improvements higher than 50% average difference in high latitudes (±60°), highlighting the advantage of using bifacial tracking in these regions. 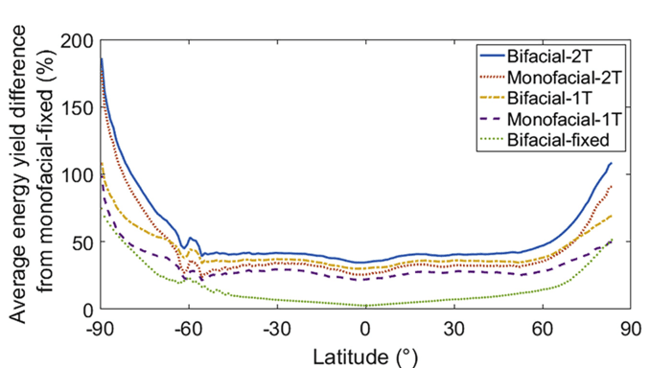 irradiance gain can vary from 1% in equatorial regions to 40% in high latitude areas for fixed-tilt ground mounted systems.

On the other hand, when studying the cost difference of the structures, the article reveals that overall cost of bifacial-fixed systems is slightly higher than the one from its monofacial counterpart because of the higher inverter, installation, and O&M costs.

To conclude, the article combines energy yield and cost difference to study the LCOE of the different configurations and technologies. As a result, bifacial installations with single-axis trackers reach the lowest LCOE almost everywhere, 93.1% of the total land area. These findings are explained by the fact that one-axis tracker systems generate comparably high yields, while requiring only marginally higher cost.

On the other hand, although two-axis tracker systems in general generate the highest yield, their considerably more expensive mounting structure outweighs the benefits in energy generation.

Other calculations such as the ones in the study “Optimization and performance of bifacial solar modules” predict that for a low ground albedo of 0.25 corresponding to vegetation/soil, ground-mounted bifacial solar modules can only achieve bifacial gain up to 10% relative to their monofacial counterpart across the entire world (except for the Arctic and Antarctic regions where it would be higher).

On the other hand, the report “Modelling of Single-Axis Tracking Gain for Bifacial PV Systems” calculates that gains in terms of specific production (kWh/kWp) can be estimated to be between 5% and 15% for “normal” ground albedos (0.2-0.5) for fixed-tilt structures, and between 3% and 11% for single axis solar trackers in comparison to standard PV plants.

To compare the results obtained by the different studies, we have simulated our own analysis with pvDesign using the following parameters:

In scenarios with higher production albedos and latitudes such as Iceland, this percentage increases to 30% improved bifacial gain (16.55% to 12.65%).

pvDesign simulations obtained bifacial gains up to 10%, with better results in high-albedo scenarios (up to 16%). Furthermore, fixed structures were found to obtain higher bifacial gains than single-axis trackers (using the same GCR), but still lower yield specific production than trackers.

All in all, there are several studies that already prove important bifacial gains and increasing affordability with respect to current monofacial technologies.

There is no doubt that the industry will keep seeing new solar plant developments with this technology as well as simulation softwares to estimate its output.

In terms of RatedPower and pvDesign simulations with bifacials, since its introduction on the 19th of may until the 23rd of june, there have been more than 1000 simulations (155.59 GW). This represents more than 36% of total GW simulated in pvDesign.

Due to the fact that pvDesign is used in more than 100 countries in 5 continents, these numbers are a perfect worldwide snapshot of what is really happening concerning the adoption of bifacials and the industry preferences.